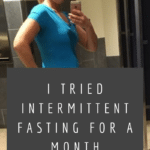 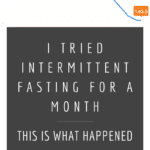 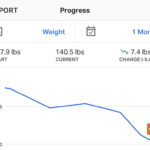 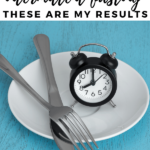 I have a confession, 6 months after I shared my results from running four times a week for three months, I fell off of the running wagon. I think that because I had reached my goal (I lost 20lbs for my trip to Punta Cana by running four times a week) that I felt that I could take a break. I looked great, I felt great and I thought I didn’t have to run as often to maintain the way that I looked and felt. Of course missing one run a week quickly became missing two runs a week, and next thing I knew I hadn’t run in 6 months and my weight creeped up, I’ve tried HIIT transformation challenges in the past, but this time I decided to try Intermittent Fasting.

What is Intermittent Fasting?

One of the goals of Intermittent Fasting is to limit your calorie intake by temporarily putting your body into a fasted state. This in turns invokes various healing and regenerating processes in the body {*}.

How do you do Intermittent Fasting?

The most standard approach is called the 16/8 method. Under this system, you choose a 16-hour fast window during which time you do not consume anything other than water, tea, or black coffee. The other 8 hours are for consuming food.

What Are Some Other Types of Intermittent Fasting?

5:2 Intermittent Fasting – The 5:2 diet basically calls for only eating 500 calories or less on your fasting days for 2 days out of the week and eating normally the other 5.

24 Hour Fast – Some people practice fasting for a full 24 hours once or twice a week. This is also called the “Eat-Stop-Eat” method.

Comforting and perfect for a cold winter night! 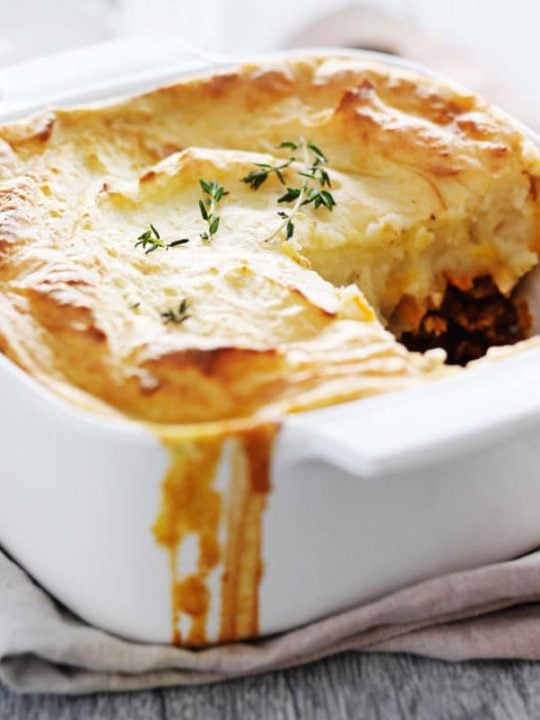 A simple version of the classic meat and vegetable comfort food casserole topped with cheesy garlic mashed potatoes, this is the best Shepherd’s Pie recipe you’ll ever make!

MAKE THIS RECIPE → The Best Shepherd’s Pie Recipe Ever!

What happens to your body during Intermittent Fasting?

When you eat, your body naturally converts carbohydrates into glucose. Then, your pancreas produces insulin to help absorb the glucose to burn as energy. The glucose that isn’t needed immediately for energy then gets stored into fat cells.

During Intermittent Fasting, the decreased amount of carbs you are eating, in turn, signals to your body to reach for the stored glucose from those pesky fat cells for energy.

And thus, we are burning calories from the fat and reducing our fat stores.

Why I decided to try Intermittent Fasting?

Truthfully, I decided to try Intermittent Fasting because I needed to do something drastic. I was eating everything and anything, all.the.time and I gained 30lbs over the course of two years. Most of that weight I gained during the last year. I wanted to break that weight gain cycle, but I needed to do something drastic, but easy. I also didn’t want to try anything dangerous.

I am one of those people who wake up every morning absolutely STARVING, so waiting until noon to eat wasn’t something I thought I could handle, so I decided that I would start fasting at 6pm until 10am the next morning. That meant I would wake up, have a black coffee (yes, you can have calorie free drinks during the fasting period), get ready for work, drive the kids to school, drive to work, then wait until 10am to begin eating.

I kept healthy foods at work that I could eat whenever I wanted if it was during my 8 hour “eating” window.

How I got started with Intermittent Fasting

The best part about Intermittent Fasting is that it’s a unique weight loss method in that it doesn’t take a lot of effort or preparation. My eating “window” was 10am to 6pm so most of my meals were during the day while I was at work. Because my time is limited while I’m at work, I pretty much only have time to eat what I bring to the office. I don’t have time to run out during the day to buy a lunch. We have a fridge, freezer and microwave at the office so I filled the fridge and freezer on Mondays with my food for the week.

At 10am I would break my fast with a greek yogurt and a fruit, either an apple or a banana. At noon I would defrost a frozen dinner in the microwave at work for lunch, and eat a cheese string, or have a salad, usually with a chicken breast. In the afternoons I snacked on carrots and hummus, and at 5:30pm I would eat my last meal of the day – usually whatever my husband had prepared for us to eat (pasta, chicken fingers & fries, chicken caesar wraps, etc).

I have to admit that the first few days of Intermittent Fasting were hard. My daughters are in the middle of their hockey seasons so every night we’re at a hockey arena where the arena fries and popcorn smell SO GOOD!

On the first night it was really hard to resist the temptation to snack after 6pm, I felt like it took ALL of my willpower to resist. On the second night I brought a bottle of water with me to drink while I waited for their practices to end. I quickly realized that drinking water really helped with the urge to snack…. It turns out that in the evenings I wasn’t actually hungry, my evening snacking and cravings were because I was bored and thirsty!

As I mentioned above, my weekday mornings are busy, so delaying my breakfast to 10am wasn’t hard at all. There were a few evenings where I would have an evening snack, so I would delay breaking my fast until noon. Those days were considerably harder. Thankfully black coffee is ok while fasting, and I normally drink my coffee black so there was no adjustment there.

After a few days I found that my normal cravings for all things sweet diminished. I tried to drink a lemonade one afternoon and found that I had to water it down because it was far too sweet for me!

My Intermittent Fasting Before and After Photos

It’s only because a picture says a thousand words that I’m sharing these photos with you. The picture on the left was taken on day 1 when I weighed 147.9 lbs, on the right you can see that I felt much more confident when I weighed in at 140.5 lbs. A weight loss of 7.4lbs!

I’ve tried a lot of weight loss fads over my life time, some are crazy hard to do (Whole 30 I’m looking at you), and other methods have been easier. Out of everything I’ve tried, I found Intermittent Fasting to be the easiest to get started with, and also the easiest to stick with. It’s not a complicated weight loss plan, nor was it hard to fit it into my lifestyle. I liked that my cravings for sugar diminished and I snacked a whole lot less. Overall I’m pretty sure I consumed far less calories because I was snacking less. I think this is why I I experienced the weight loss that I did. I can see how partnering Intermittent Fasting with regular exercise and even a keto diet could take your weight loss to the next level. 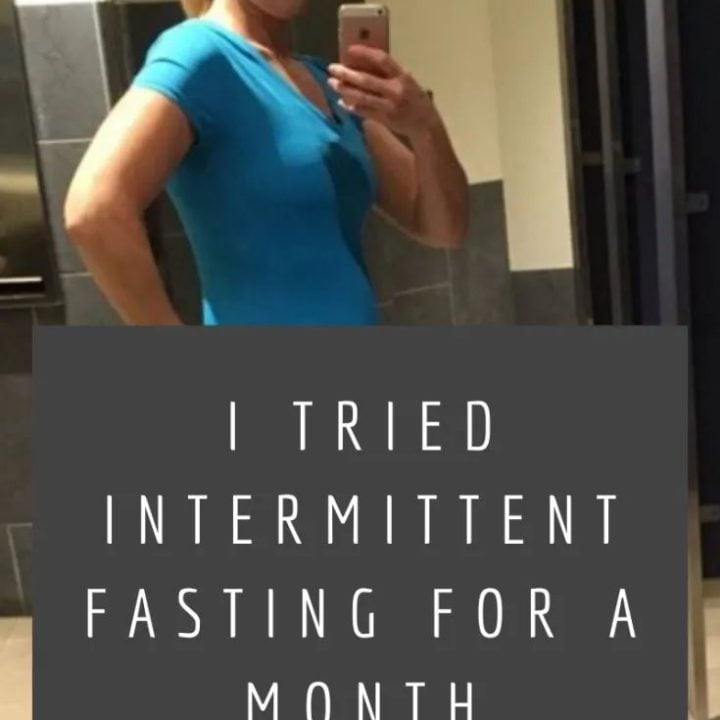 Pin this for later

What’s My next step?

How many days of the week were you fasting

I've been building up my fasting from 12 hours a week ago to 16-17 hours finally this week. I haven't done much exercise during my fasts but I plan to next week. What were your results like combining IF and running?

That is great progress and very inspiring to read the comments here. I’ve started couple of weeks back and am enjoying the journey. Feels like I have more energy.

However I did seem to have some sensation of acidity one day and had to take an acid reducer. I’ve been more careful ever since and am drinking more water. Also, I was doing 21-3 vs 16-8, but should move to 16-8 now.

Exercising is also helping. I’m playing some sport 4x weekly and trying to walk 10k steps other days. I’ll need to be on IF for several months until I get my BMI within normal range. Easier to do this while younger, but I’m trying my best as a 49 year old single dad trying to lead with example.

My daughter and mom who both live with me are also trying this out. Wish us luck :)

Great job with the fasting progress!! I ended up combining IF with a 12 week HIIT/Strength challenge, that I completed a week ago. I ended up averaging a weight loss of half a pound per week (6 lb total loss), my body fat percentage decreased by 2%, my resting heart rate lowered from an average of 69 bpm to 62 bpm, and my estimated VO2 max increased. I did not workout during the fasting period though - it would be interesting to try sticking with an exercise program where the workout is done consistently towards the end of the fasting window. I'll be sharing more of my HIIT/Strength results in a post within the next few days.

Can you have stevia with your coffee in am??

@Becca, Actually some intermittent fasting gurus say that anything sweet (diet coke, stevia...) will spike your insuline even without the calories and lower the benefits of IF

Yes! You are free to put stevia in your cup of coffee when intermittent fasting. This is because it doesn't increase your blood sugar or insulin levels. However, personally I don't fancy the aftertaste of stevia, I would rather have my coffee completely black, but that's entirely up to you!

Can you have sugar in your coffee? I just started and I have been having sugar. Also does it matter what you decide to have for a dinner meal?

Hi Nancy, A cup of brewed coffee is fat-free and almost no-cal, it won’t screw up your fast...so long as it's black coffee. Unfortunately coffee variations add-ins will add fat and calories—and consuming fat and calories means you are no longer fasting. You can have anything you want for dinner.

Thanks for writing back. I will definitely try the strength training. All I do is walk hills everyday for about an hour and thought that would be all I needed. Btw you look awesome at 45!

I’m Janice, a Kinesiologist passionate about cooking EASY, healthy, real-food meals and finding ways to sneak in workouts, join me as I share healthy salad recipes and our easy and healthy family friendly recipes!

Want to collaborate?
Send me an email

WHAT’S INSIDE THE FREE DIGITAL COOKBOOK

I have a B.Sc. in Kinesiology and a certificate in Athletic Therapy. I enjoy sharing information, experiences, ideas and recipes. Views expressed on this website are based on my own personal research and experiences. Please consult your doctor if you require information about  any medical issues, or before beginning a training program.