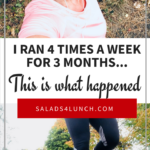 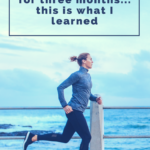 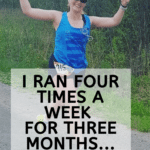 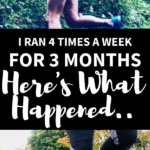 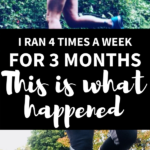 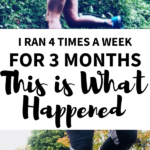 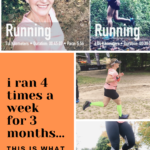 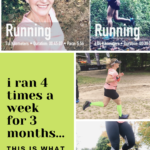 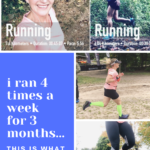 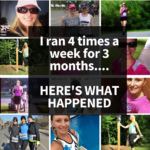 Three months ago I made the decision to see what would happen if I ran four times a week, these are my results.

Three months ago I made the decision to see what would happen if I ran four times a week.

I’ve read articles about people who did Yoga everyday, did a plank everyday, gave up alcohol for a month, or did 10 minutes of strength training everyday and I once tried Intermittent Fasting for a month, so I was curious what consistency with my running could do for me.

While I’ve been a runner for a very long time (17 years), I have never really ran with any consistency.  Some weeks I would run only once, other weeks only twice, some three times, and VERY RARELY four times in a week.  Occasionally I would “train” for races, but again, I wasn’t really consistent with my training.  I’ve always had this notion that running more often would lead to injury, so I just ran whenever I felt like it, and never really pushed my boundaries.

Because of my history of inconsistency, the idea of streaking always appealed to me – a goal like that could help me to become more consistent.  Unfortunately my family and work life has never been conducive to the kind of dedication that running every single day takes. However, when I reviewed my family and work obligations I realized that running four times a week was something I actually could do.

For the past three months I ran four times a week, this is what happened:

#1 I Felt Better Than I Had in Years

The first week it was really hard to motivate myself to run the four times because every single run sucked.  Even though running felt hard and uncomfortable, I did feel much happier after I ran, perhaps it was relief that I was finished?

After my first week I decided to give myself permission to run slower, walk when I needed to, and not pay attention to my GPS, pace etc.  The only thing that mattered was that I got out there and ran for 30 minutes four times every week.  Even though I felt happy that first week, I felt WAY happier the next few weeks when I was running at more comfortable paces.  That happy feeling lasted longer because I was also able to enjoy my runs.  I even began to *gasp* even look forward to running!  My happiness spread to many other parts of my life.  I felt better than I had in years!

While I admit that I was really hoping this would happen, I was very surprised by how fast it happened and how much I lost.  The first week I lost 1 pound.  The second week I lost another pound.  Three months later I’m down 12 pounds!  I’ve averaged 1 pound of weight loss every week.

While I would have liked to have lost more weight faster, according to The Centers for Disease Control and Prevention there is evidence that shows that people who lose weight gradually and steadily (about 1 to 2 pounds per week) are more successful at keeping weight off. Healthy weight loss isn’t just about a “diet” or “program”. It’s about an ongoing lifestyle that includes long-term changes in daily eating and exercise habits. Running four times a week is is a lifestyle habit that I really want to keep.

Comforting and perfect for the holidays! 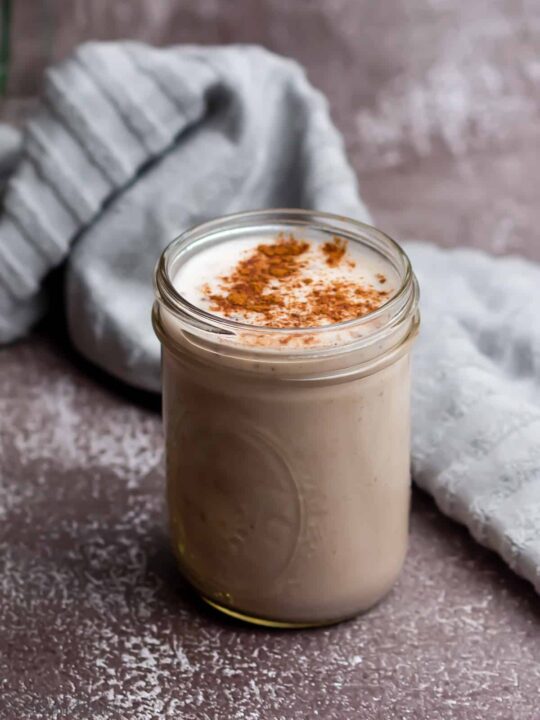 This easy homemade vegan eggnog recipe is the perfect holiday drink – It’s creamy, delicious, dairy-free and healthier than traditional eggnog! Why you’ll love this recipe This easy, comforting and creamy homemade Vegan Eggnog is flavorful and delicious. Made with simple and minimal ingredients, this egg-free and dairy-free eggnog is a healthy alternative to the…

Losing weight is a nice benefit of running four times a week, but changing my body composition is an even nicer part. I have a Fitbit Aria Wi-Fi Smart Scale scale that measures my weight and body fat percentage.  Although I was losing weight, it was nice to see that the weight that was being lost was fat, not fat and muscle.  The fat really started coming off at first, but now three months later it’s coming off slower, but is still coming off.

Anxiety is my middle name.  I am the type of person to lay awake for hours worrying about work, etc.  But interestingly, when I began running nearly every day of the week I found myself completely exhausted by the time bed time rolled around.  At first I could barely stay awake until bed time! Staying “up” until 10 pm is easier now, but I still fall asleep as soon as my head hits the pillow.  Work stress is definitely no match for running consistently!  I don’t stay awake worrying about tomorrow anymore, I can’t, I’m way too tired.  I also sleep more deeply. Waking up at 5:20 am to run again hasn’t been a problem, I’m waking up rested and ready to run again!

Now this one is probably a no-brainer, the more you do something, the better you get at it, right?  What I wasn’t expecting was how much faster I got after only three months of running four times a week.  Running sucked at first because when I ran the pace that I felt I should be able to run, my heart rate was in the high 160’s – every run was a tempo run.  I slowed my running down to run at a heart rate of 140-150 bpm.  Over the weeks my pace has improved from an average pace of 6:44/km (10:50/mile) to 5:46/km (9:29/mile). I now run over a minute faster/mile at the same heart rate! 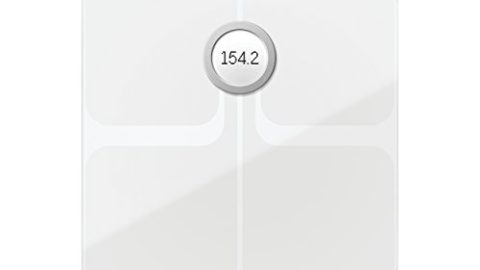 Sync your health data easy-breezy with the built-in Bluetooth to get a clear summary of your weight, body fat, lean mass and BMI sent right to your smartphone. 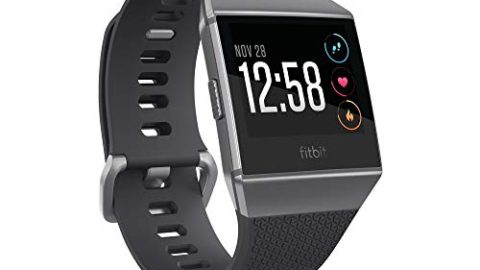 Get personalized workouts and coaching to reach your goals, track your pace & distance with built-in GPS and monitor progress with continuous heart rate.

That one decision to try running more consistently has been a game changer for me. Last week I added in a fifth run (speedwork) into my schedule, and this week I’m on track to run five times again (I did some speedwork this morning faster than last week). I’m surprised by the changes because at *cough* 42 I thought that the loss of speed, the weight I gained and the changes to my body composition was a normal part of aging. It appears that they are not. I’m starting to re-evaluate my future running goals… Perhaps a sub-50 minute 10k is within my grasp? Maybe I can improve my half marathon PB (1:50:40) and run a sub-1:50 half? Maybe at 45 I *CAN* qualify for Boston, wouldn’t that be something?!? I know I’ve only been running consistently for a few months but I’m willing to go for another three months of consistency to see where it gets me, I’ll let you know how it goes.

Have you ever tried streaking?  What happened?

Today November 5 marks my 3 months of running, I have lost about 8 lbs since I started this journey,I am currently 31 years but people at work think am 22 or 24,my self esteem has boosted I love how light I feel I lost a small tummy I had,now I can wear crop tops, I have increased my pace ,yesterday I ran 5k in 26 minutes,today I finished 5.7 miles in 1h38 mins,min, can now run 15kilometers comfortably ,I look forward to compete for cross-country the coming spring and then start training for half marathon.

Amazing!! Keep up the great work!

GREAT article! I started running, again, in the beginning of Sept. I am now running 30 miles a week (6 miles, 5 x a week). However, I feel like I am swelling up/gaining weight! From all the research I've done, I am told that my body is going through the 'inflammation' process and to be patient. In the beginning, did you gain weight? TIA!!!

The same exact things happened to me. My goal was 20 miles a week (and like you, I didn’t worry about pace) and over the last year, I went from 167 to 128. I feel strong and have less anxiety and more confidence. Thanks for sharing and congratulations on your new lifestyle!

I run 3 times a week, 2 miles each time, and I find so many benefits for doing it! I love running!

That's a great running routine Jennie! I love running too :) Thanks for stopping by!

I’m Janice, a Kinesiologist passionate about cooking EASY, healthy, real-food meals and finding ways to sneak in workouts, join me as I share healthy salad recipes and our easy and healthy family friendly recipes!

Want to collaborate?
Send me an email

WHAT’S INSIDE THE FREE DIGITAL COOKBOOK

I have a B.Sc. in Kinesiology and a certificate in Athletic Therapy. I enjoy sharing information, experiences, ideas and recipes. Views expressed on this website are based on my own personal research and experiences. Please consult your doctor if you require information about  any medical issues, or before beginning a training program.